Heart attack (cardiac arrest) became a leading cause of death after the turn of the century. Humans have always suffered from cardiac problems, but they usually died from causes such as infectious disease, long before reaching an age where heart problems threatened their life. As the world of medicine has advanced and people are living longer, heart disease has become a serious health issue.

Claude Beck (1894-1971) was a pioneer of heart surgery, he focused on operations to improve circulation in damaged heart muscles. He also developed ways to revive heart attack victims, including the defibrillator and CPR. 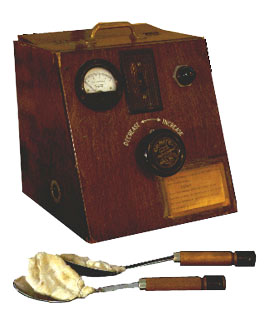 In 1947, Beck successfully defibrillated his first patient, a 14-year-old boy whose heart went into fibrillation after an operation. The defibrillator used on this patient was made by James Rand, a friend of Beck. It had silver paddles (the size of large tablespoons) that were used in open-chest situations. Rand made two defibrillators that first year of 1947: one can be found in the Smithsonian, and the other in The Bakken's collections.

In Belfast , ambulance-transported physicians first achieved pre-hospital defibrillation in 1966. Defibrillation by EMT’s (emergency medical technicians), without the presence of physicians, was first performed in Oregon, in 1969.

Our Goal: An AED wherever tragedy may strike.

AEDGrant.com Public & Private Entities Grant for funding Automated External Defibrillators (AEDs). This program is designed to help institutions and individuals everywhere place these amazing life-saving devices at an affordable price. You may even apply as an Individual for a Home AED! Generous participation and corporate backing have been secured by AEDGrant.com for this corporate sponsored AED Buy Down Grant Project . AEDGrant.com also offers training for CPR and AEDs. AEDGrant.com can help you donate an AED, receive funding for an AED Device, place defibrillators in your home or workplace, help public facilities obtain AED Grants for Automated External Defibrillators and discounts on AED Batteries and AED Cabinets. We work with AED Manufacturers such as Medtronic, Philips, Defibtech, Heartsine, and Zoll to provide state of the art AED machines like the OnSite, FRx, LifePak CPR Plus, Lifeline, Samaritan PAD, and more... let us know your Defibrillation of AED Training need, and we can help you find your AED answers. We even have resources for refurbished AEDs and AED Refurbishers. What was your search term & what Search engine did you use? Email us, we'd love to know!